In celebration of the wonderful birth of Jesus Christ, King of Kings who became a human being and entered our world 2000 years ago, these children performed a beautiful dance.

Performed by children who are part of the Explorers club of Sunday school of Living Hope Church, all these lovely dance steps were conceptualized by the famous Gwendoline, their dance teacher. On site supervision was done by Divya and Racheal.

Researchers at Lancaster University, UK have taken a hint from the way the human lungs and heart constantly communicate with each other, to devise an innovative, highly flexible encryption algorithm that they claim can’t be broken using the traditional methods of cyberattack.

Information can be encrypted with an array of different algorithms, but the question of which method is the most secure is far from trivial. Such algorithms need a “key” to encrypt and decrypt information; the algorithms typically generate their keys using a well-known set of rules that can only admit a very large, but nonetheless finite number of possible keys. This means that in principle, given enough time and computing power, prying eyes can always break the code eventually.

The researchers, led by Dr. Tomislav Stankovski, created an encryption mechanism that can generate a truly unlimited number of keys, which they say vastly increases the security of the communication. To do so, they took inspiration from the anatomy of the human body.

In nature, different systems within a living organism often interact with each other, exchanging matter and energy. The interaction between two such systems (for instance, that of the human lungs and heart) can be described by a so-called “coupling function.” 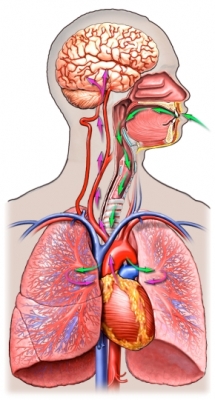 Rather than relying on a single system for the encryption, the researchers decided to use two, and use the coupling function between them as the encryption key. Although somewhat laborious, this method has the advantage of creating an infinite number of possible keys, meaning that eavesdroppers cannot simply bruteforce their way into
sensitive information.

For the more technically minded, here’s how it all works. An information signal reaches the transmitter and is used as a parameter in the coupling function between two self-sustained systems, both generated inside the transmitter. The two signals are then sent over the public channel. At the other end, these two signals synchronize
with the receiver and, using a private key that contains information on the coupling functions, the algorithm can infer the original parameters and decrypt the  information.

The scientists say that their method is highly resistant from noise, that it can easily transmit several signals at once, and that it is highly modular, making it suitable to a wide range of applications.

A paper describing this patent-pending algorithm appears in the journal Physical Review X.

Life and its processes are really complicated. This somehow does not fit in with what is taught in schools these days, doesn’t it? We are taught that random mindless processes [taught to be Evolution] somehow created life in all its complexity. I guess it is time to revisit the foundations of our belief 🙂